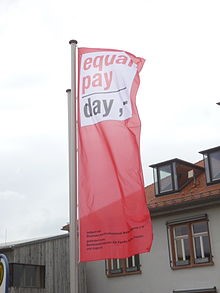 Shocking as it might seem, from today until the end of the year, many women will effectively be working for free. Today marks the day when the gender pay gap kicks in – Equal Pay Day.

It’s the point in the calendar at which the average man has earned the same as the average woman will take the whole year to earn.  If you’re a woman lucky enough to be earning the same as your male colleague, congratulations!  But according to the law of averages, this means there’ll be some poor women out there whose pay is even more dismal than the average which balances that out.

So, as the story of how women even got this far is fascinating, I went this week to a talk organised by the Women’s Legal Landmark team discussing the Married Women’s Property Acts of 1882 and 1964. For centuries and centuries, the common-law doctrine of couverture meant that on marriage, a woman became femme couvert – she more or less legally ceased to exist and all her rights and obligations were covered by her husband. Effectively, she couldn’t do anything without her husband’s agreement and signature – enter contracts, own property, borrow money, get credit, go to court. Which meant that it was near impossible for a woman to run a business in her own name in the eyes of the law and, importantly, she could easily lose everything if the marriage ended.

This despite the fact that it is obvious throughout history that women worked and worked. We have always earned and contributed financially to the upkeep of the family, including husbands. Very often in medieval times it was the woman at the front running the shop, managing the apprentices, dealing with people, while the husband was in the workshop out at the back. And, equally, rural women worked with the men in the fields. There were even trades in which women completely dominated.  Perhaps the most obvious was the 19th century textiles industry. It gave us words like spinster, originally just meaning a woman who spun, and the distaff line – since it was always women holding the distaff – a spinning tool.

As well as low status jobs such as laundering and domestic service, women were running their own businesses in retail. These ranged from General Stores (a look at any 19th century trades directory confirms this) through to high end luxury businesses and other services. The recent City Women  exhibitions in London tell the stories of 18th century businesswomen, with examples of business cards for female dentists, fanmakers and many others.

All fine if you were a single or widowed woman (and workable, I suppose, if there were no problems in the marriage).  But the fact was that whatever money married women earned did not legally belong to them!

A huge step forward, then, was the first Married Women’s Property Act of 1870, which granted married women the right to keep any money they earned, and own property inherited from family in their own name. But progress to full financial equality was long, slow and very definitely fraught.

As usual, it’s the stories of the real women along the way that are the most fascinating. Take Mrs Blackwell, for example: she got married in 1925 and didn’t work outside the home. One assumes it wasn’t a happy marriage but Mrs Blackwell stuck with it until in 1941, when she left him.  She took with her the £103 that she had saved up in her own bank account. She’d earned this by doing all the work involved in keeping lodgers in her house and by saving something from the housekeeping money her husband gave her.

Despite the fact that Mr Blackwell had previously agreed that this was his wife’s own money, when the marriage broke down, he wanted it back. Mrs Blackwell was sponsored by the Married Women’s Association (who called themselves the housewives’ trade union) and the case went to the Court of Appeal. But such was the devastating argument of Lord Justice Goddard “If a wife has a right to the money she can save from her housekeeping allowance….She might serve up corned beef instead of roast beef for dinner”,  Mrs Blackwell lost the case.

It wasn’t until 21 years later in 1964, that the shortest of all the Married Women’s Property Acts (at only 72 words) said that, “in the absence of any agreement to the contrary….housekeeping money will be treated as belonging to the husband and wife in equal shares” Another important step along the way…

Then in 1968 came the Ford machinists’ strike, dramatized in the film “Made in Dagenham”. Their fight for pay and grading helped to finally make the 1970 Equal Pay Act happen.

So, working women – whether outside the home or within it – Happy Equal Pay Day!

Let’s use it to remember Mrs Blackwell, and all the other women who fought to get us this far.

But remember – the fight is not yet over.