Putting the genie back in the bottle: women workers after WW1 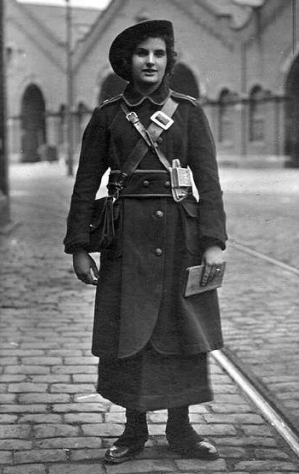 World War One: it sucked women in, transformed their lives beyond recognition – then spat them out again in 1918, like so many unwanted parcels.
Because in 1914, the government desperately needed women to fill the jobs of men who’d gone off to fight. But in 1918, those men were coming home -and wanted their jobs back. Thousands of women changed their work from domestic service to ‘men’s’ work during those four years. Responding to the cry for help from government. Most of them would later find themselves surplus to requirements.

Before the war, the main occupations for women were wife, mother or domestic servant. Female domestics were low paid skivvies, working 17 hours day in a back-breaking jobs that only brought in about 6 shillings weekly. They were given only a half day off each week.

During the war, a new world opened up for them, as they were urged to enter professions they were previously barred from. They became tram drivers, conductresses, munitions workers.

The Post Office, then the largest employer of labour in the world, was particularly welcoming to female workers. It had lost 35,000 men to the Western Front. Simultaneously, the war was creating an unprecedented demand for Post Office services, as it was inundated with letters, food parcels, clothing sent by loving families for their men on the front lines. Demand was so great that a massive new Post Office was created in Regent’s Park with 2,500 workers, most of them women. A quarter of a mile long, it handled a staggering one hundred and fifty million parcels and 2 billion letters over the course of the conflict.

But women weren’t just postal workers. It quickly became apparent that they could turn their hands to almost anything, including tough labouring jobs. They filled artillery shells, made mouthpieces for gas masks, trundled heavy wheelbarrows in chemical works. They painted aeroplanes, hauled wood in timber yards, unloaded goods from trains. Usually while wearing dresses!

But it all came to a shuddering halt in 1918 when the men started trickling back. True, in some ways, women were rewarded for their four years of sterling work. In 1918, some females over the age of 30 were given the vote. A year later, for the first time, the Sex Discrimination (Removal) Act allowed women into a range of professions. They could become lawyers and accountants, sit on juries and become magistrates. But that same year, another piece of legislation effectively rolled back the clock. Most women, particularly working class women, were expected to turn their jobs over to the returning men. Some found lower-ranking jobs with less pay. But even then, they were forced to leave their jobs if they got married. Many were forced out of the relatively well-paid industrial workforce and back to the drudgery of domestic service. If they refused to go, they could be denied the relatively new unemployment and pension rights. Meanwhile, far too many females found themselves acting as unpaid nursemaids to their injured menfolk.

But there was no way to put the genie back in the bottle. The women who’d had a taste of freedom during the war wanted more. They may have been forced back to the kitchen, but they now knew that they could do almost anything. During World War Two, their daughters would be called on to serve. And this time, it would be virtually impossible to turn back the clock.