“A Rattlesnake in the Chamber” 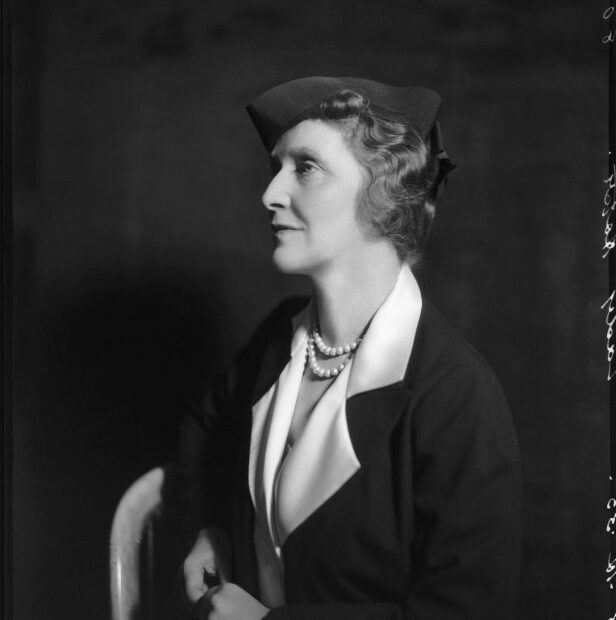 This week, activists in Plymouth are celebrating the approval of a statue of Nancy Astor, the UK’s first sitting female MP.  Here’s our take on the trailblazing Lady Astor.

It wasn’t Nancy Astor’s idea to stand for Parliament.  It was her husband’s.

In 1919, Waldorf Astor, MP for Plymouth Sutton, inherited his father’s title and was unwillingly elevated to the House of Lords. Hoping to return to the Commons, he encouraged his wife, wealthy American socialite Nancy, to stand in the ensuing by-election to keep his seat warm.  It was a novel idea.  It was only a year since propertied women over 30 had been given the vote and females were finally permitted to stand for Parliament.

Waldorf didn’t know what he’d unleashed.  Far from being a pliant place-holder, Nancy, Lady Astor, was to remain in the Commons for a quarter of a century.  And she was her own woman.

An American divorcee, to a certain extent Nancy had always been an outsider.  Until now, her social position had protected her.  The immensely wealthy Astors were massively influential, entertaining royalty, politicians and famous actors at glittering parties at Cliveden, their country estate.

But that counted for naught when she became the first female MP in the Commons.  Nancy said she felt male MPs “would rather have a rattlesnake than me” in the Chamber. 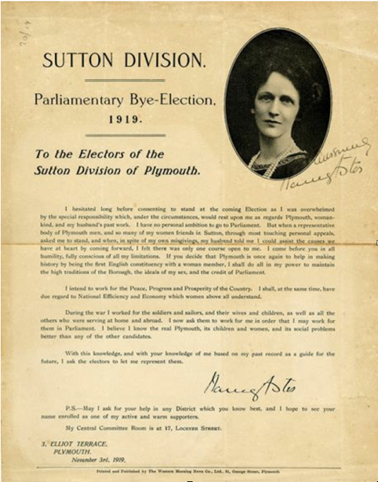 She had broken into an institution which was perhaps as much a gentleman’s club as a legislature. When she tried to take her seat she had to push past jeering male MPs, some of whom tried to block her way.  The nearest ladies’ loo was about a quarter of a mile from the Chamber.  She was excluded from dining rooms and other all-male facilities.

Her office, the “Lady Members’ Room” was the Parliamentary equivalent of outer Siberia – a small room in the basement.   In the 1920s, she was joined by other female MPs, who sometimes had to sit on the floor because of overcrowding. The office was dubbed the Tomb, or The Dungeon

Male MPs, including friends who’d dined at Nancy’s home, would blank her in the corridors of the Commons.  They included Winston Churchill, who said having a woman in the Commons was like having a female burst in on him while he was having a bath.  Churchill later told Nancy “we hoped to freeze you out”.

But the fact that Nancy was there at all was a breakthrough for British women, who finally had someone to speak for them.  When she first arrived at Paddington Station to take up her seat she was greeted by a delegation of excited suffragists, who’d so far failed to get any of their own candidates into Parliament.  She later asked the suffragist leader, Millicent Fawcett, for advice.

Nancy received up to 2,000 letters from women each week and took up some of their grievances. She lobbied for universal suffrage, better maternity and nursery provisions, and many other measures to improve the lot of women.  Although a Conservative, she’d later work with female MPs from other parties on women’s issues.

She was sometimes erratic, often controversial, a woman of strong opinions.  She was devoted to Scientology, reportedly to the extent of trying to convert the Communist leader, Stalin, while on a trip to Russia.  She was virulently anti-alcohol, pushing through legislation to ban it being sold to under 18s.

Nancy also held views which today would be considered unpleasantly anti-Semitic, anti-Catholic and anti-Communist.  In the 1930s, in the run-up to the Second World War, the Astors were vilified after entertaining appeasers of Adolf Hitler.  One Labour MP addressed Nancy as “the Member for Berlin”.  Others accused the Astors of being fascists – an accusation Nancy vociferously denied.  Nevertheless, she lost popular support and was pressured by her family into stepping down as an MP in 1945.

But female politicians owe her a debt of gratitude.  She was a courageous trailblazer who selflessly supported the handful of women who immediately followed her into Parliament – and forged a path for hundreds more to follow.

Now – finally – a statue is to be erected to her in her old constituency, thanks to a campaign by https://www.ladyastorstatue100.co.uk/

Their website mentions the possibility of a campaign for a similar statue to be erected in London’s Parliament Square, which in our opinion, is long overdue!

Nancy Astor is one of the female trailblazers featured in a new In Her Shoes walk, “Westminster, Women and Power”.